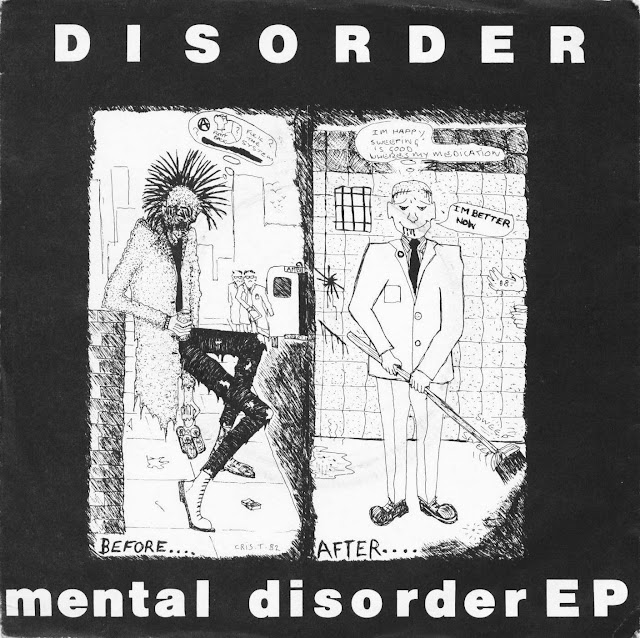 There are few reasons why I'm posting this record:
1st because I went to Bournemouth (English south coast) last weekend to watch a gig and once again I met Taf (Disorder's bass guitar) and we were chatting about the band for while;
2nd because I was watching a Brazilian movie called "Bicho de Sete Cabeças" (Brainstorm) which is about a middle-class teenager, who lives a normal life until his father sends him to a mental institution;
3rd because I think this is the best Disorder's release and they are a fucking wicked band.
Disorder still playing but I'd rather call it "Taf and his 'band' " than Disorder. Sometimes he puts some good guys together and something good comes out of this but sometimes it is just a tragedy. Since 1998 I've watched some good and some terrible gigs.
I wish I could see Boobs (the singer on this record) joining the vocals again but he still in Spain serving years in jail. Apparently, Steve (guitar) is in Holland, dunno if still involved with Punk. Virus (drummer) just don't care about Punk anymore.
I fucking like the cover of this record, the front drawing is hilarious, the back cover you can find the lyrics and a note that says:
"The Rampton Song is dedicated to Martin who used to play drums for Amebix. He was arrested by the police whilst walking along a pavement. The 'offence' was strange behaviour. He was put under observation in the psychiatric ward of the Royal 'free' (joke) Hospital in London, He was held for two months and released...Their game didn't work, he kept his sanity." 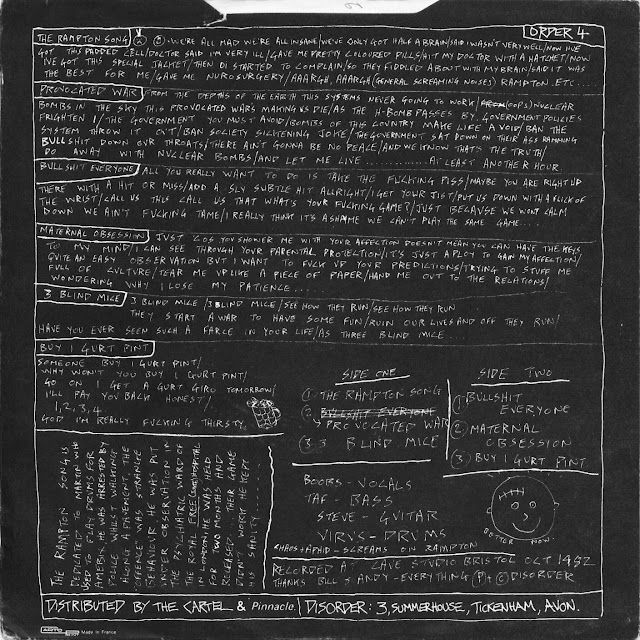 Also, keeping the Disorder spirit, there is a mess on the track list on the cover and on the label of the record between "Maternal Obsession" and "Bullshit Everyone" where they are swapped.
"Mental Disorder was recorded on october 1982 and released on 1983 by "Order Records" which was in fact Riot City Records, I mean, Order Records was created by the Riot City Records boss Simon Edwards only to release Disorder's records.

I like the fact that Disorder is now Taf & band - all the latest stuff I heard is good, and for me Disorder is disorder, literaly meaning. In otehr words the bands current state or un-state is very appropiate. Not sure how much I like the Dolly Parton schtick tho' (despite the fact that i find Joleen on best of more than remotely listenable (though hardly a highpoint of the band). HOWEVER as opposed to you I haven't seen the band play - and having seen my share of ridiculous bands still playing under bandnames that should have changed circ 20 years ago I can well see your point.

That said, naturally I'd show up at any gig having Disorder playing even if it only had a ex-fanzie editor who used to correspond with Taf in the late 1980s and four of his best mates who used to play in a Disorder coverband. (what I just wrote makes me think of the Fall incidently)...

re rampton song - i always assumed amebix's largactyl refered to the same 'incident' but that he did not keep his sanity...

ahhh,the good ol' disorder!
pity its not my favourite ep but does the same job in my head!
even nowadays whenever i listen to theyre earlier stuff,i just feel like getting off my tits with alcohol,drugs,whatever i can get my hands on to get me high as a kite!just as they say"someone buy 1 gurt pint...!"
hail.

Total fucking class - I remeber this coming out - we went mental (haha!) over the rampton song!

There are specific side-effects triggered off by the anti-anxiety drug xanax and therefore, after taking the xanax 2 mg tablet, you may suffer from hallucination, nausea, depression etc. However, these side-effects disappear over time and without stopping your xanax administration, as you continuously take the medicine according to the doctor’s instructions, you would surely obtain relief from the shackles of anxiety. http://www.xanax-effects.com

hey buddy great post about DISORDER - Mental Disorder EP, my uncle has some mental disorder for his reason I'm very interesting in this type of information!!

Hey friend excellent information about DISORDER - Mental Disorder EP, I want to add this information A mental disorder or mental illness is a psychological or behavioral pattern that occurs in an individual and is thought to cause distress or disability that is not expected as part of normal development or culture. The recognition and understanding of mental disorders has changed over time and across cultures. Definitions, assessments, and classifications of mental disorders can vary, but guideline criteria listed in the many cases there is no single accepted or consistent cause of mental disorders, although they are often explained in terms of a diathesis-stress model and biopsychosocial model. Mental disorders have been found to be common, with over a third of people in most countries reporting sufficient criteria at some point in their life. Services for mental disorders may be based in hospitals or in the community. Mental health professionals diagnose individuals using different methodologies, often relying on case history and interview. Psychotherapy and psychiatric medication are two major treatment options, as well as supportive interventions and self-help. Treatment may be involuntary where legislation allows. Several movements campaign for changes to services and attitudes.

Mental illness is common these days. All of us may face Mental problems like stress, depression, vertigo, lack of sleep, anxiety, mental and emotional disorder.
Buy zopiclone online 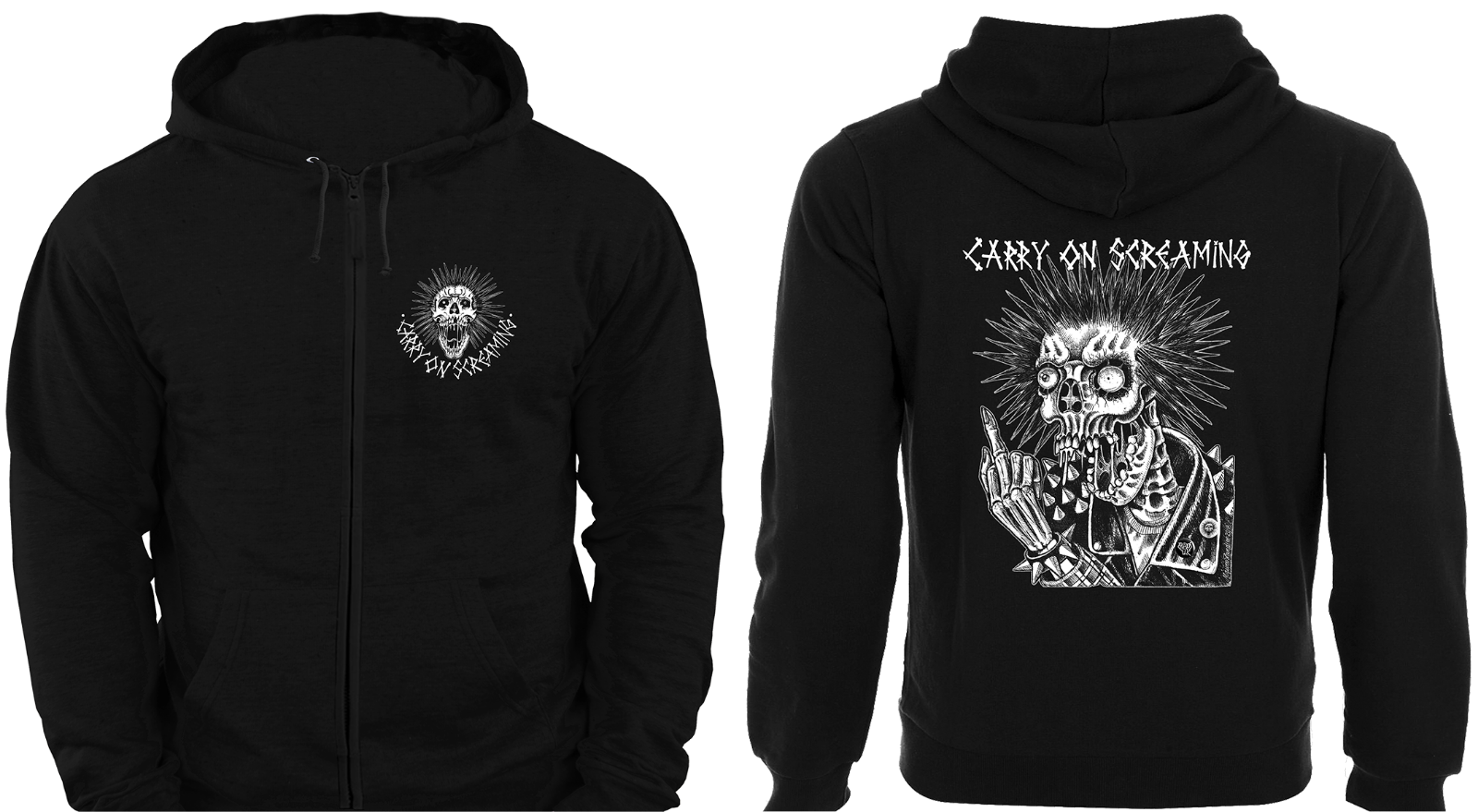